CloudKit security model is barely described in documentation, yet it's very important aspect of this cloud solution. I do care about privacy and I believe privacy aspect is important when implementing Cloud driven solutions. The subject is not widely explained in documentation, hence I'm writing this blog post as a notes for future me - with all the important information I was able to gather.

I can setup C(reate)R(ead)U(update) access for each Record Type (if you're not familiar with terminology of CloudKit, think about Record Type as it would be database table).

Security Role gain/revoke access to each of three operations:

I may assign Permission to Role, then Role to Record Type - this way I build access control list:

There is more... world and everyting.

In addition to custom security roles, there are 3 predefined roles: 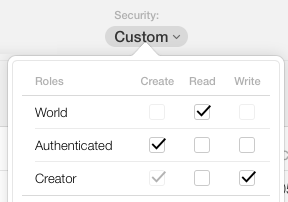 This need a little explanation.

World is for everyone. In practice this is everyone in the world, whether iCloud user or not. The access is public to everyone.

Creator is for iCloud user that is creator of record. This Role is per record. If user Susan created record, and user Andy created another record - this Role allows each access to it's own records, and not to record created by another user (unless other security roles allows that).

Default setup allows for reading to anyone, creating new records for authenticated iCloud users only, and creating and updating own records by creators.

Add user to the role

I can't create user record. It is created whenever user authenticate to the container for the first time. I can lookup for the existing user (by any field) and assign to one of the custom Security Roles. Now the user permissions are specifically set up.

This can't be done automatically though.

Server setup will check the constraints. It's up to the application to care about the access, in general. When my application need to work on public database, and users have to operate on public records, It's my responsibility to limit the data.

If something is public (read) - then it is public.

The same apply to access via CloudKit Web Services. Server, by default is not the super user. I have to either authenticate with the user, or have special role assigned to my user to perform any operations.

Database data is protected from the Apple employees and any other authorities. They can't lookup my records - don't have this authority by design. It's all encrypted, as it is standard for iCloud.